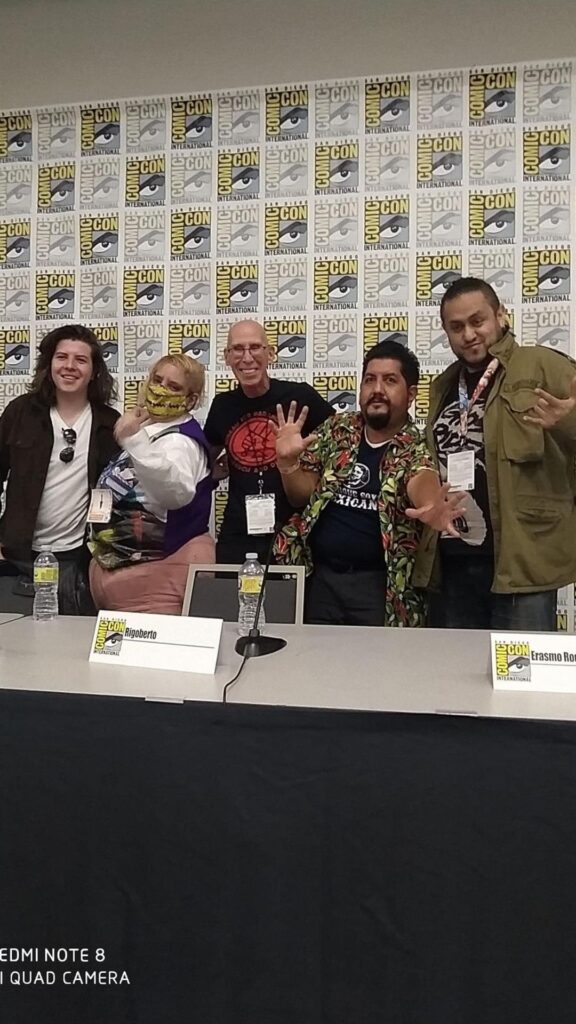 Summer is almost gone.  Soon our thoughts will turn to my favorite time of year…Autumn!

Halloween, Thanksgiving, and cooler weather for those of us in warmer climates. Leaves and trees ablaze with color for those in the temperate areas. Pumpkin spiced everything and warm cups of favorite beverages. Yeah, Fall has lots to offer, and I love it all.

But, before all that, I had one of the best summers I can remember. Travel figured quite a bit for me.  All my efforts culminated with San Diego Comic Con (SDCC) 2022. The show had been on hold due to Covid.  It came roaring back this year. As I wandered the halls and streets of San Diego, I ran into many celebs.  I even had one come to a panel I was part of, more on that after a few more lines of my summation of the show in general.

It was unreal to walk past a display of sand sculptures on the street and see The Sandman himself, Neil Gaiman walking amongst the tributes to his wonderful comic, and now TV series. Walk a little farther and there’s Bruce Campbell and his “Pizza Poppa” cart mugging for the crowds. This time we were the ones who got paid by his hanging out with dozens of fans. Stephen Colbert hosted a panel. Patrick Stewart and Gates McFadden shared an on-camera kiss. All the current Star Trek shows were represented at panels and on the show floor. At night, the city became a city of heroes and villains all raising glasses and hell. If you’ve never been or have an original idea and concept you want to find a home for, then take your chances to get a pass.  Or if you are an industry comics pro with provable provenance, apply to get a pro pass and join the rest of us in the green rooms and at the tables to plan and plot. I make more deals and get more projects launched there than any place else. I don’t care how big some promoters tell you how big or important their show is, nothing else is SDCC.

I was honored this year to be asked to participate in a very unusual panel which now has had repercussions of positivity beyond what I thought would come. The story of this begins last November.

SDCC wanted to test the “batteries” as it were to see if the summer show to come could work with required vaccinations and other issues at the time.  I was invited to come to the “Mini” con and get to be part of the most controversial and hazardous panel they’ve ever done. It was a little minefield called: “What is cultural appropriation opposed to appreciation?” It was organized by my friend, advisor on Mexican culture and artist for my book, “Chavela, Chocolate and Cthulhu” … Adalisa Zarate.

Ada has been instrumental in bringing Mexican culture to the show including doing programming, as well as being integral in getting artists, film makers, and writers from her beautiful country to be now mainstays at the show. Even when racism and bigotry rampant under a certain disgraced US president, she persevered. And, because she knows I’m passionate and forward-thinking SOB and disliked that president with heat hotter than the hell, I represent as my Satanic alter ego from my film.  Plus, I like a good fight and to bring hope and understanding to a world desperately failing in brother and sisterhood as of late. The creator of Green Lantern, Martin Nodell once told me that I would have made a good lantern as I have no fear. I laughed and said that I’m too dumb to be scared.  LOL!

Ok, all that side, we did the panel, and it went over great! It was tense and there were a few moments where logic and reasoning had to brought to a steel edge, but it got so much attention that we were asked back this summer to do another along the same lines. What I did not realize was that it was going to be at the center of another controversy and help to clear said trouble. Here’s what happened…

The new Marvel universe offering in the Black Panther series, “Wakanda Forever.” It features a new Panther due to the untimely demise of the brilliant actor, Chadwick Boseman. This alone created controversy and hatred on line but then, another character being introduced started its own watery maelstrom. They cast Mexican Actor Tenoch Huerta to portray Namor, the Sub-Mariner. This caught many by surprise and not a pleasant one. Tenoch was under attack from even other Latins of other places outside Mexico for his role. They called him names beyond ones deserved and I was disgusted by it.

I am a huge Namor fan since I was a kid. I collected the original 1940’s books because I was fascinated with him. But, I’m also an open-minded person and got angry because they were not attacking the new mythology as much as they were attacking the actor portraying the character. I even had some heated conversations with friends from Cuba, Puerto Rico and South America who had worked with me in the past. We went at it like comic and film pros, not just troll fan folk. This was professionalism breaking down to me. I don’t give a damn if they never speak to me again or if my already crazy rep gets more mud on it, I was not going to watch bigotry bloom over something untested and not yet seen but disliked because they just felt the person was unworthy due to birth. I’m Jewish and have lived this idiocy for my whole life and fight like hell over it. The real reason for my anger was the ignorance of the character in the first place. Namor’s origin was that his father was a sea captain sailing the North Pole region when he encountered a woman of blue skin who was in trouble (Yeah, sound as like another water-born hero doesn’t it. well, the Sub Mariner was introduced almost a year and a half before Aquaman. I wonder if Jason Momoa had the same grief as he was dark and swarthy and not the blond hero, we all knew till the film series from DC). So, Namor was not “Caucasian”, because a teal hued mom ain’t gonna achieve that. So, let’s push forward to today.

This Namor is from a region off the coast of Mexico and South America and so it makes sense that he would be from an aquatic race consummate to the Olmec, Toltec or Aztecs. This is film and comics. We take liberties with mythology all the time. Wonder Woman is from Greek mythos but wears costuming honoring the USA. Now, are you getting what I’m throwing folks? It’s about the story and involving us enough to make us embrace it. But if we fight from the beginning and not even try then we are being ego and ethno centric ignoramuses. Here’s where you can close this page and go find something else to do if you want. But if you read farther, you are going to see something pretty cool. Go ahead and decide. I can wait.

Still here? Cool and welcome to the “global village”. I’m proud to know you.

So, Ada gathered myself, Erasmo Rodriguez- a radio journalist and clay cartoonist, also former contributor to Mexico’s MAD magazine, from Mexico’s film region of Guadalajara in the state of Jalisco, a brilliant comic artist Raul Valdes popular YouTube comedian Sebastian Finck and of course Ada herself. We took the dais and proceeded to talk of how we all can enjoy the world’s mythologies and learn from one another and do so without prejudices. As we were talking, cutting up and bonding, I noticed a really striking gent in the front row who was smiling ear to ear from our crazy antics. He was dressed as Mr. Fantastic and looking very cool. He applauded heartily when we finished and like a proper super hero disappeared to is next mission.  I had spotted Kang the Conqueror earlier and figured Reed had run to do battle with his long-time foe. Erasmo afterward when we were hanging out told me who the FF leader really was. It was Tenoch Huerta! He had heard from Erasmo what we were planning and came from his own panels and promotion for his upcoming debut film to see us.

Here was my favorite Marvel hero come to see us pontificate about his right to exist in our branch of the multiverse. I was so happy that I forgot my twenty-five years of being a pro not going fan boy and lost my shit. I’ve been partying with lots of film, comic, writing and TV celebs in the past but Tenoch was special to me as he was a good person and fighting the great fight for his role and himself as an actor to take his place in the Marvel and film universe.  With grace, good humor and intelligence I know he has, I look forward to seeing his debut in “Wakanda Forever”. And by the way, word reached me that if we do another panel like this, he is going to get the studios permission to join us on stage. If he does, I only hope Momoa doesn’t decide to challenge his Marvel rival. It won’t go well. I’m a tough bastard and have been a sport fisherman for most of my life.  If Aquaman thinks the Black Manta is a dangerous foe then he is about to meet the “Devil Fish” known as Mitch Hyman.

Now go read some comics, watch some film and TV and keep your minds fresh and open. I’ll see you all back here next month!

Be and stay well!