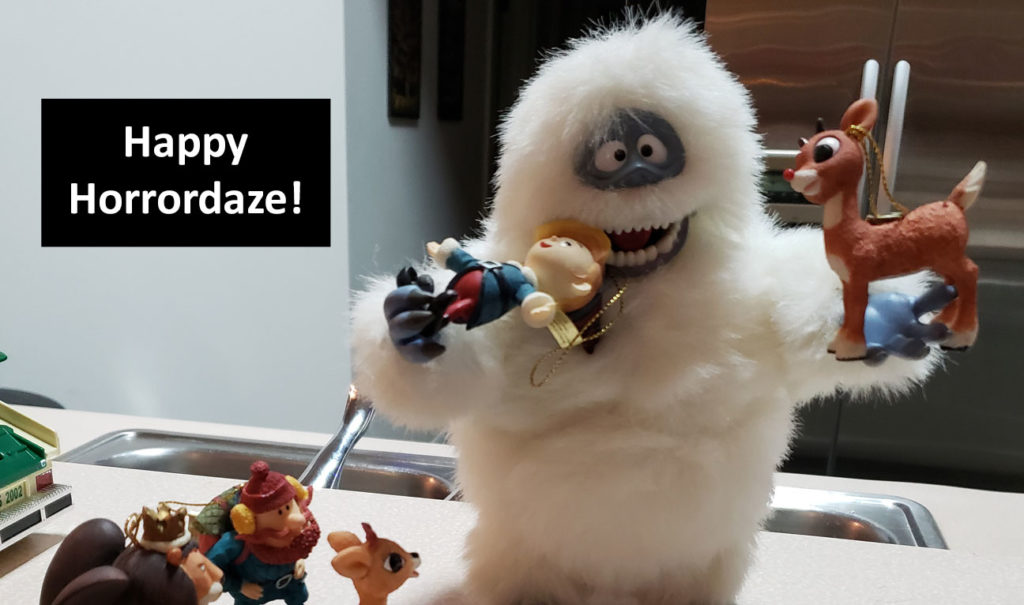 As my late father used to say, “It’s December, celebrate whatever ya got. And, do it like it was your last.”

Well, that’s what I’m up to at least. I apologize for being kind of scarce last month. I had a bit of a shock, and it’s why I just put one of my dad’s quotes up here to kick this off.

For those we’ve lost.

Last month as some of you may know, Shawn Surface, who was a dear friend and family to me, passed away. You long time Bubba fans know that it was Shawn who gave Bubba his most distinctive look.  He wrote one of his funniest adventures when space aliens were trying to kidnap Bobbi-Jo for repopulating their planet with intelligent life. No wonder they had no interest in Bubba!  It truly is one of my favorite Bubba stories, and why I will miss Shawn forever. He understood me, Bubba, and the world a lot better than most, and we are all poorer for his light being dimmed when we need all the bright and shiny folks now more than ever. Rest well, buddy, and thanks for the gift of you being my friend. I will cherish it always.

This time of year is when we all look back on the last twelve months and try to see where we’ve gone, what we’ve done and who won’t be with us for the next year’s journey. So, for all of you who have lost people and pets this year, I promise time will not make it better, but it will make it easier to go on. Because, time is a river, and we are mortal boats moving along with the currents both fast and slow.

Year’s end is also a wonderful thing because it offers hope.  I myself had years where I just figured nothing was going to improve, and I’d best chuck it all. We all have those times. But, I knew in my heart that I had made a difference, even a small one, by being here and pushing onward almost like Sisyphus and that damn rock. Shawn was one of us in that respect. He never quit, but his body would not agree with his brain that wanted to push onward.  His health was the thing that finally took his dreams to the next realms, and I bet now free of that constraint, he has a line to the Crab Nebulae at the great cosmic comic con.

As for the rest of us here still?

No matter how bad the odds are, or how many times you tried, you always have one more chance because there is no way you’ve met everybody, been every place or created everything in the world.

Sometimes it’s just leaving your comfort zone that can take you to victory lane.  No matter how hopeless, you know deep down there is one thing you need to do, and courage and conviction will at least make you try. It took me 23 years after all the major comic magazines and several newspaper articles in places like the Chicago Tribune and so on had proclaimed Bubba and myself the next big thing. Turned out they had good instinct. Bubba is now globally known, and the first film has now been dubbed. Not subtitled. Dubbed. So, I am now working on the next script for the next Bubba film.

Stay on with this website and blog to see how it progresses, and I will discuss any steps that worked and also the ones that didn’t. Just because the film was a hit does not mean a studio or streaming wants it.

I have had in-person meetings with VPs and CEOs at several of the biggest Hollywood studios and I turned down deals for two reasons.

First, they like to own all their content these days, and I am not selling Bubba outright. License or a partnership to produce, hell yes. But sell? Nope. The other reason? Option’s can leave you with none. Options I mean. They can buy the rights to develop, and you can get all braggy and say your concept is in development, and everyone will give you a thousand likes on Facebook or whatever social deal you’re into at the moment.

You are now a “swipe left” tinder leftover. There is a 30 percent chance they will actually make your concept. There is a ten percent chance you’ll make real money from it. You see there is itemizing that will be in that contract or deal that will eat up your end of the profits not unlike anyone stupid enough to want DVDs or other things made for the project. Trust me, distributors have done this for years and who do you think they learned it from? The studios and channels.

So how do you win?

I only found this out myself recently. You’ve all seen the video interview I did concerning the horror film we call The Dutchman. In the last few months, because of some quiet promoting and learning about how media now really operates, the video is at over 120,000 views and my channel is at 1,000 plus subscribers and growing every day. Now, when you hit a certain level you get paid because of ads and so on. This is great. The ads are a minor inconvenience to the viewer, but some are as entertaining as the video you want to watch. You also get control of your message and market.

It takes time to build, and you will have to have something out there already getting attention, but if I can do it, so can a lot of you.  You are only limited by your imagination and your drive. The only thing that can sideline you is bad health. Some is unavoidable, and some is just that you must break bad habits and put some steel in your ass. Not your back, your ass. My reason why is because you will be falling on it a lot, and you’re gonna need the resilience.

All right, this was two months of blogging because I have a script to write, plus more work on The Dutchman.

There’s been a very scary development concerning it, and next month, I will have a new video up with a special guest who now has fallen victim to this entity that seems to prey on the innocent.  This is why I would sell this particular concept outright. I’m tired of electronics exploding, small children being visited by things masquerading as dead relatives in order to hurt them, and other things to be told soon. Bubba, like Vinnie and Mook, are my creations and I control them. This thing is dangerous, and even though I know how to handle it, I am tired of doing damage control when it gets in a mood.

Anyway, time for that later.

Right now, all is calm and merry and bright.

So, enjoy whatever and whomever you have. And be happy if you enjoy good health. Do not miss out on using it to get farther in your life. To those who do not or to those we have lost due to it this year, let us remember them by doing what they were cut so short of achieving.

Be and stay well. Lighten up and do the same for others where you can.

A very merry and happy whatever the hell you want, too.